Battling with chronic pain? Fed up of people telling you to think more positively when all you can think about is a miracle cure for those daily aches and niggles?

These kinds of comments may be annoying, but there could be some truth in taking such advice on board!

According to our Newcastle Under Lyme chiropractor who has treated patients suffering with a variety of chronic pain, pain is a very subjective experience. Expectations, stress, social support and underlying beliefs can all have an influence on the degree of pain one feels. And of course, it’s long been recognised that optimism and positive thinking can influence an individual’s experience of pain.

Caring for someone with chronic pain? It isn’t easy, but there are ways you can support them in managing their condition with these top tips from our Newcastle Under Lyme chiropractor:

If you know or care for someone who has chronic pain, there are things you can do to help support them in managing their condition.

Understanding what chronic pain feels like can be difficult if you haven’t experienced it yourself. Do your best to listen when the person you care for tells you how they feel. It may also be a good idea to speak with their medical team or go along to appointments to gain a better insight into their condition.

Chronic pain isn’t something anyone should have to experience alone. A strong support team is likely to help the person you’re caring for to manage their condition.

Continue to treat them as a person

Although you’re naturally going to show concern about a person in pain, it’s also important to show interest in other parts of their life such as their hobbies, job and family. This will help to remind your loved one that you see them as a rounded human being and that you don’t define them by their chronic pain condition.

Our team of chiropractors are always here with help and advice.

January is in full swing, and for many of us it’s back to the daily grind of alarm clocks, commutes and deadlines. It’s a tough month, but if you work in an office, it could get even tougher. According to our Newcastle under Lyme chiropractor, hunching over a computer is a leading reason why so many office workers end up with crippling back pain. But a few small changes in the way you work can make your pain disappear. This is what you need to be doing ASAP:

Keep your head up

When you’re working at your keyboard, focus on aligning your head and neck right above your shoulders instead of hunching over or straining forward.

Ideally, your mouse should be placed right next to your keyboard so you don’t have to overreach or twist your shoulder, arm, or wrist when clicking.

Pick a chair that allows your lower back to rest comfortably against a lumbar support. You should also be able to tilt the back of the chair so that it’s very slightly reclined.

If you suffering from back pain why not make an appointment to visit our experienced chiropractors at Newcastle Chiropractic Clinic. 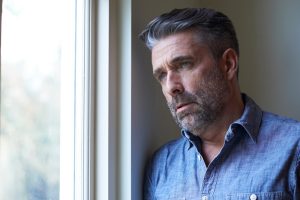 There’s no doubt that January is one of the most depressing times of the year; December’s festivities are over, our wallets are emptier and it’s back to the daily grind. But could the January blues cause back pain? Quite possibly, according to our Newcastle under Lyme chiropractor.

Depression is the most common emotion associated with chronic back pain. Depression can cause pain, and pain can cause depression. Sometimes, back pain and depression result in a vicious cycle where the pain worsens symptoms of depression, and then the resulting depression increases the feelings of pain.

For some people, depression can cause unexplained physical symptoms such as back pain, neck pain or headaches.  For many, this kind of pain is the first or only sign of depression. Inevitably, pain and associated problems can wear you down over time and have a negative impact on your mood.  As well as this, chronic pain can cause a number of problems that can lead to depression, including sleeping problems, stress and low self esteem.

The type of depression that accompanies chronic pain is referred to as major depression or clinical depression. These feelings go further than what would be considered normal sadness or feeling “down” for a few days.

Some of the symptoms of depression may include:

To get symptoms of pain and depression under control, you may need separate treatment for each condition. However, for some people, certain treatments may help with both.

Remember that it’s relatively normal to feel a little “blue” in January, but it’s important to be aware of the symptoms of depression, including chronic pain.

It’s not easy being in pain. So when it comes to getting rid of those aches and niggles in your neck, you want it to take as little effort as possible, right? That’s why our Newcastle under Lyme chiropractor has three lazy ways to beat neck pain:

1: Take a load off; it’s as simple as that! When your neck feels tight, sore or painful, it’s time to give those aching muscles a rest. Lie down, but don’t use a thick pillow.

2: Grab the Epsom Salts from the cupboard. One of the most effective and easiest ways to soothe sore muscles is probably already sitting in your medicine cabinet!

3: Drink water. Other than oxygen, there is nothing your body needs more than H20! Every cell in your body requires water to function properly, so make sure you are getting enough!

Sometimes the simple things are all it takes to make a world of difference!

We all know that a happy mind makes a happy body, but what exactly can you do to supercharge your mental well being? Here are 7 healthy habits from our Newcastle under Lyme chiropractor that will help to get you happy and healthy this autumn:

1: Daily Physical Activity: Make a commitment to doing some form of  exercise for at least 20 minutes most days of the week.

3: Foster Creativity:  Think outside of the box; challenge your mind to connect unrelated ideas in new and useful ways.

5: Spiritual Connectedness: Look for a source of inspiration that is bigger than you.

6: Energy Balance: Focus on balancing your intake and outtake of calories and reduce your carbon footprint.

7: Choose Simplicity: Embrace the freedom and contentment that comes with wanting and needing less.

The body and mind are very closely connected. Don’t underestimate the power they have on one another.

WE ARE OPEN and ARE READY FOR YOU!

On the 23rd March we closed our clinics in order to comply with government’s message to Stay At Home, Save Lives and Save the NHS.

We have now been advised by the British Chiropractic Association that we can see all our patients. The government guidelines to patients who are shielding still apply so we can still help you via telephone or video consultation.

We have worked very hard behind the scenes to prepare for the re-opening of our clinics to our patients and new patients to create a safer environment for all.

Please read our advice page here and see the procedures we are implementing for your safety and ours!

We look forward to helping you and can’t wait to see you!

We thank you for your patience, stay safe and keep healthy!